What are the health effects of contaminants in drinking water?

The EPA has set standards for more than 80 contaminants that may be present in drinking water and pose a risk to human health. The EPA sets these standards to protect the health of everybody, including vulnerable groups like children. The contaminants fall into two groups, according to the health effects that they cause. Your local water supplier will alert you through the local media, direct mail, or other means if there is a potential acute or chronic health effect from compounds in the drinking water. You may want to contact them for additional information specific to your area. Acute effects occur within hours or days of the time that a person consumes a contaminant. People can suffer acute health effects from almost any contaminant if they are exposed to extraordinarily high levels (as in the case of a spill). In drinking water,microbes, such as bacteria and viruses, are the contaminants with the greatest chance of reaching levels high enough to cause acute health effects. Most people’s bodies can fight off these microbial contaminants the way they fight off germs, and these acute contaminants typically don’t have permanent effects. Nonetheless, when high-enough levels occur, they can make people ill, and can be dangerous or deadly for a person whose immune system is already weak due to HIV/AIDS, chemotherapy, steroid use, or another reason. Chronic effects occur after people consume a contaminant at levels over the EPA’s safety standards for many years. The drinking water contaminants that can have chronic effects are chemicals (such as disinfection byproducts, solvents, and pesticides), radionuclides (such as radium), and minerals (such as arsenic). Examples of these chronic effects include cancer, liver and kidney problems, and reproductive difficulties 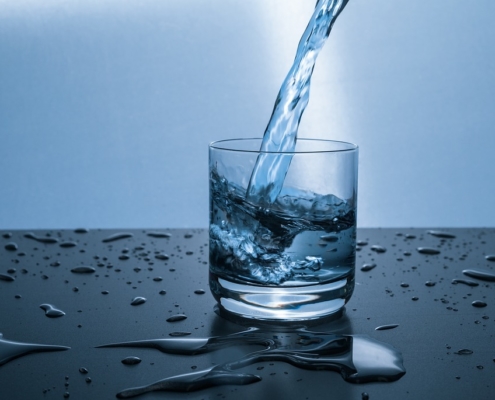